I took some time off from updating the blog to enjoy being home. I didn’t do one of these last month so I figured I would do one this month! Also, happy new year. I didn’t think this would be procrastinated as much as it is. Expect more posts in the next few days.

Jack and Jackie: Portrait of an American Marriage by Christopher Anderson – I love John F. Kennedy and this book is exactly what the title says. It gives a lot of detail into JFK and Jackie’s lives before their marriage, leading up to it, and during it. I am almost done and it’s been so much fun to read. I don’t know how accurate it is but I don’t even care.

Brown Eyeliner – My thing all throughout high school was winging my Stila Stay-all-day black eyeliner. I perfected it and it just became part of my image. But now I prefer to wear brown eyeliner, with smaller wings. I feel like it’s less extra and it highlights the color of my eyes better than the black did. 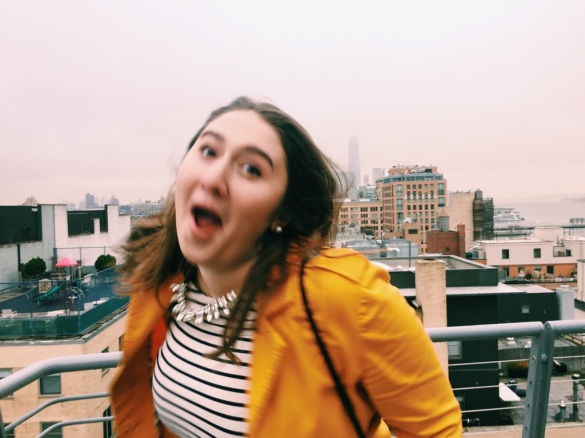 The Whitney – I went to the Whitney for the first time this week. It’s an American art museum in the Meatpacking district of Manhattan. They have a really interesting exhibit right now, I think until February, that’s all about anime and the future and screen art. There’s this one video game about refugees of communist countries in the early 1900s and I was completely entranced by it for probably an hour. It definitely infiltrated my nightmares.

VSCO – I literally don’t even care how basic this is. I love VSCO. I love how secret it feels. I love how people with private Instagrams still put it in their bio. It’s like a secret girl club where everyone posts a ton of pictures of wine bottles and car rides and photos that didn’t make the cut on their Instagrams.

133rd Street Subway Station – Michael took me to his favorite subway, which is literally 125 ft below ground. The only way down is through an escalator which when you get on it feels like you are about to fall all the way to the ground and die, it’s so steep. I had vertigo the whole time. It was insane. It takes you to the 7 train.

I made two soundcloud playlists this month, Broke bitch and Vanilla. The first is a playlist I like to listen to while showering or driving and the second basically encompasses a lot of the soundcloud songs I’ve liked recently. My favorite is This is a song. It’s amazing.

White Girl- White Girl is a movie on Netflix about a girl who moves off campus of her Manhattan school to the border of Queens and Brooklyn and what happens to her. It’s shot in a captivating and realistic manner and it’s the kind of movie that scares you and makes you uncomfortable.

Animal House- I hadn’t ever seen Animal House, but when I watched it, I fell in love with the portrayal of the school and everyone’s outfits. Especially in the hearing scene. It’s a classic National Lampoon bawdily funny movie that everyone should see.

American Eagle Holiday Flannels – I received one of American Eagle’s new flannels for Christmas this year and it is the softest thing I own. I have a hard time fitting into flannels in both the chest and arms (it usually fits in the arms but not in the chest), but their size XL looks perfect on me. It looks and feels like a nice quality shirt and can be dressed up with a vest or dressed down with leggings.

Candy Cane Lane – This candle from Yankee Candle has been my go-to candle this holiday season, besides my all-time favorite Frosted Cranberry from Bath and Body Works. I usually hate sweet Christmas scents but this is a perfect mix of candy cane peppermint and pine.

G-Zen – Over break I went to this restaurant in Branford, Connecticut with my friend Carolyn. The service was great, the ambiance was calming and lively at the same time, and the menu was phenomenal. It’s on the pricier side considering the kinds of restaurants I go to, but it’s still really fair for the price and quality of what you’re getting. It’s a completely vegan menu, which is amazing because I’m not used to being able to eat everything on the menu!!

Moscow Mule – Out of the limited scope of mixed drinks I’ve had, this is the most refreshing one. I love the mint leaves and the ginger beer is delicious. Whoever made this up was a genius.

Poshmark- I made a Poshmark a few weeks ago, and I am in love with it. It’s partially the reason I’m broke, but I’ve also been selling items on their app too. My username is @mainaeliz. So far I’ve had a really positive experience with the app and it’s been a great resource for getting rid of my old jeans.